Vision for a Carbon Negative Economy

Advanced biofuels can dramatically reduce carbon dioxide emissions compared to petroleum-based fuels. Iowa State University and BEI are exploring the possibility of actually producing energy that has net-negative carbon emissions by sequestering into soils some of the carbon captured by plants and trees. 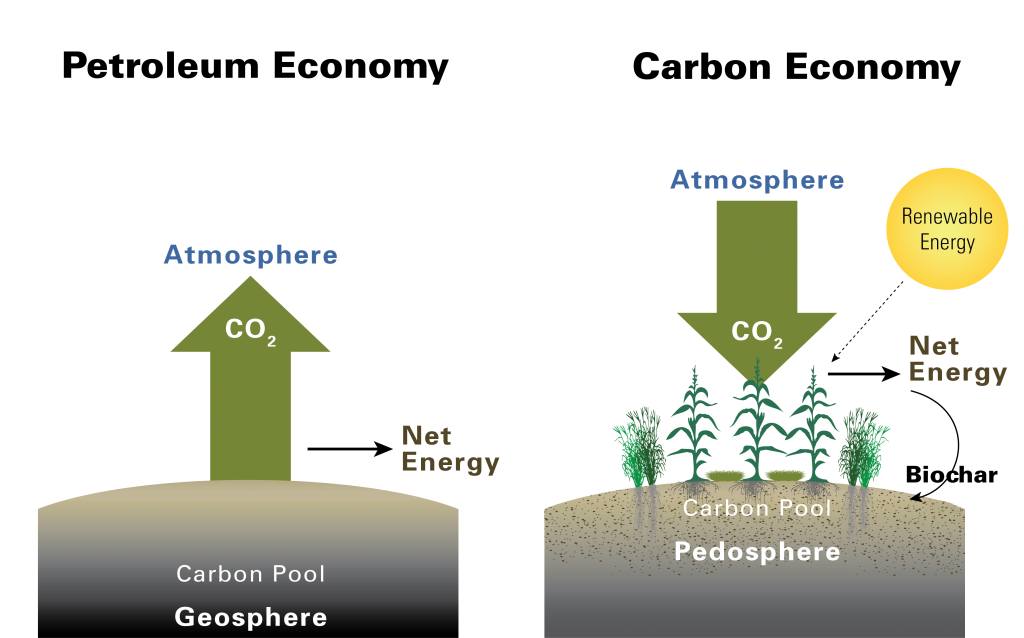 This approach is accomplished by rapidly heating biomass feedstocks such as forest products, crop residues, or dedicated energy crops in a process known as fast pyrolysis to produce an energy product called bio-oil and a carbon-rich residue known as biochar.

Incorporated into the soil, biochar can build soil quality and sequester carbon for hundreds of years. Thus, we can envision a carbon negative economy (above, right), in which energy production actually reduces carbon dioxide in the atmosphere while providing energy products to society. This is in sharp contrast with our current petroleum economy (above, left), which pumps carbon dioxide in the atmosphere to produce energy.

Iowa State and BEI have partnered with Stine Seed Farms and Frontline Bioenergy to conduct a demonstration project to evaluate the concept of carbon negative energy using residues from Midwest agriculture.

The project includes design and testing of autothermal pyrolysis equipment; agronomic studies of the effect of biochar on crop growth and carbon sequestration; economic analysis of the cost of carbon negative power, fuel, and chemicals; and life-cycle evaluations of the environmental impacts of the system.

Researchers from Iowa State and BEI are also part of the  New Carbon Economy Consortium (NCEC) launched by the Center for Carbon Removal in partnership with several research institutions. The initiative has the goal of removing carbon dioxide from the atmosphere and converting it into valuable products and services.

“Iowa State University began exploring carbon removal technologies six years ago as part of a College of Engineering-sponsored Initiative for Carbon Negative Energy,” explained Brown. “This initiative focused on drawing down carbon dioxide from the atmosphere through the natural process of photosynthesis, with part of the resulting plant biomass being converted to biochar as a long-term carbon sequestration agent.  Our inclusion as a founding organization of this consortium is a direct result of ISU’s early investment in an emerging research area long before it received much attention in the scientific community.” See New Carbon Economy Effort Launched at Arizona State University

In April 2018, more than 20 researchers and faculty members from Iowa State University met in April 2018 to discuss ideas for the university’s involvement in the NCEC. The researchers involved in the meeting represented a broad and diverse set of research areas, from agronomy and sociology to engineering and economics. Their expertise includes soil carbon, biochar utilization, climate modeling, energy policy, and environmental impacts, among many others. Ideas generated at the workshop will be combined with ideas at similar workshops at several other institutions around the U.S. into a carbon removal roadmap that will guide fund raising and research efforts for members of the NCEC.

Researchers from Iowa State University and the Bioeconomy Institute were awarded nearly $2 million to study production of biochar for use as a soil amendment that stores carbon underground instead of allowing carbon dioxide to re-enter the atmosphere as plants decompose. The award is from the Global Climate and Energy Project (GCEP) based at Stanford University.

Initiative for a Carbon Negative Economy

BEI’s work in this area stems from the Initiative for a Carbon Negative Economy (ICNE), which was active from 2011 to 2014. This national panel was led by Iowa State University in an effort to research and develop technologies that capture, use, and sequester carbon while enhancing food production, ecosystems, economic development and national security. Participants represented universities, companies, federal agencies and non-governmental agencies. The initiative received a three-year, $500,000 grant from Iowa State’s College of Engineering.