Autothermal pyrolysis is the Bioeconomy Institute’s latest development in thermal deconstruction of biomass into biofuels and biochemicals. BEI is developing the basic technology and is working to demonstrate it on a commercial scale.

In autothermal pyrolysis, only air is used as the fluidizing gas. As a result, the energy for pyrolysis is provided through partial oxidation of pyrolysis products within the reactor. By eliminating the heat transfer bottleneck of conventional pyrolysis, several-fold process intensification is achieved. 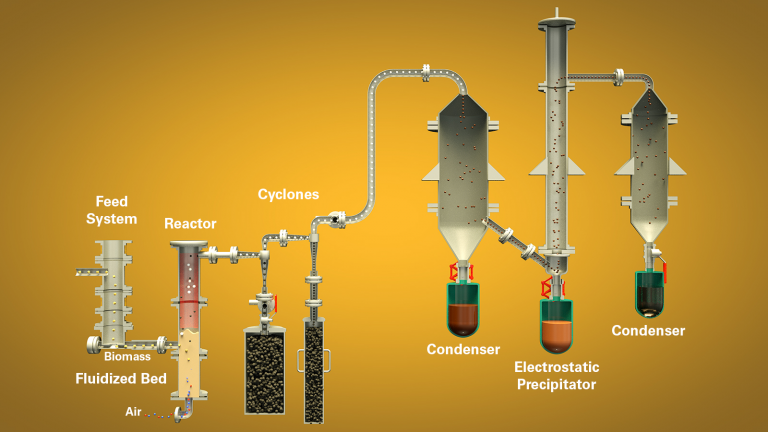 We have modified our well-known pilot system to research autothermal pyrolysis. In this system, bio-oil is recovered in fractions, a patented BEI technology. The products include sugars for cellulosic ethanol and phenolic oils for production of bio-asphalt and diesel engine fuels. Autothermal pyrolysis also produces an excellent biochar, which can serve as a soil amendment and helps make the process carbon negative.

BEI is working with private and public partners on demonstration-scale projects of the technology. This effort is being accelerated by the DOE-funded RAPID Institute, the country’s tenth Manufacturing USA initiative. The project includes pilot-scale testing and design of components for the demonstration plant. We’re also analyzing life-cycle costs and the environmental impact. 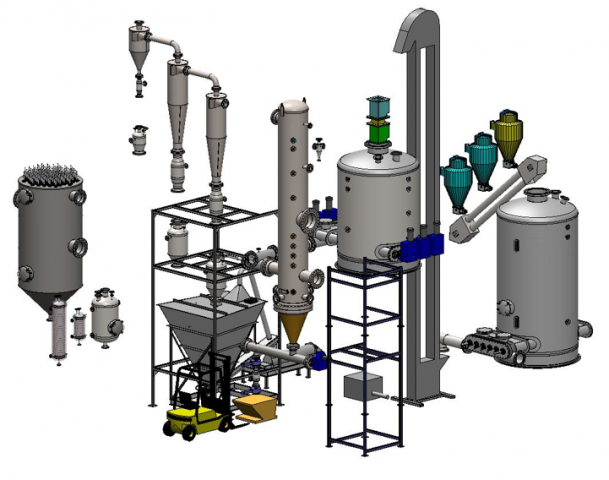 Here are some BEI publications in autothermal processing:

The high ash content of agricultural residues and other kinds of herbaceous biomass makes it a challenging feedstock for fast pyrolysis to bio-oil. Using corn stover as a representative feedstock, this study investigates fast pyrolysis of high ash, herbaceous biomass in a pilot-scale fluidized bed reactor using both conventional, nitrogen-blown and autothermal, air-blown operation. Initial efforts to pyrolyze corn stover were challenged by bed fouling, which prevented steady reactor operation. Substitution of coarser bed material allowed operation at higher superficial velocities, which promoted attrition and elutriation of recalcitrant biochar particles from the reactor. This resulted in dramatic improvement in stable reactor operation for both conventional and autothermal pyrolysis with bio-oil yields among the highest reported for pyrolysis of corn stover. The oxygen-to-biomass equivalence ratio required for autothermal operation was 6.8%. Autothermal operation also resulted in significant process intensification, increasing corn stover throughput from 7.8 kg hr-1 to 21.9 kg hr-1 for this 8.9 cm diameter reactor. Air-blown, autothermal operation did not significantly reduce bio-oil yield despite the presence of partial oxidation reactions. Carbon balances indicate carbon yields of biochar and aqueous, bio-oil light ends decreased by 18.5% and 4.7%, respectively, during autothermal pyrolysis compared to conventional pyrolysis while the more valuable, organic-rich heavy ends of the bio-oil were essentially preserved.

Heat transfer is the bottleneck to fast pyrolysis of biomass. Although the enthalpy for pyrolysis of biomass is relatively small operation at temperatures around 500°C constrains heat carrier selection to inert gases and granular media that can sustain only modest thermal fluxes in practical pyrolysis systems. With heat transfer controlling the rate of pyrolysis, reactor capacity only scales as the square of reactor diameter and does not benefit from economies of scale in building larger reactors. We have eliminated this heat transfer bottleneck by replacing it with partial oxidation of pyrolysis products to provide the enthalpy for pyrolysis in a fluidized bed reactor, a process that can be described as autothermal pyrolysis. The oxygen-to-biomass equivalence ratio depends upon the kind of biomass being pyrolyzed and the level of parasitic heat losses from the reactor, but under conditions that simulate adiabatic operation, equivalence ratios are around 0.10, compared to 0.20 or higher for autothermal gasifiers. At this low equivalence ratio, there was no significant loss in bio-oil yield when operating the reactor autothermally (64.8 wt.%) as compared to conventional pyrolysis (64.4 wt.%). Carbon balances indicate that less valuable pyrolysis products (char and aqueous, bio-oil light ends) are consumed via partial oxidative reactions to provide the enthalpy for pyrolysis. While the carbon yields of char and bio-oil light ends decreased by 25.0% and 21.3%, respectively, the most valuable pyrolysis product (bio-oil heavy ends) only decreased 8.0%.

Acid infusion of lignocellulosic biomass as a pretreatment prior to fast pyrolysis has been shown to significantly increase the yield of sugar in the products. However, under these conditions char formation increases forming large agglomerates that clog the reactor and eventually interrupt operation of the system. In the present study, partial oxidative pyrolysis of acid infused red oak was performed in a fluidized bed reactor at 500 °C with the concentration of oxygen in the sweep gas ranged from 0 – 8.4 vol% in an effort to mitigate char agglomeration. The addition of oxygen reduced char agglomeration by up to 88.9 % compared to the control run during pyrolysis ensuring continuous run of the reactor. Moreover, the addition of oxygen increased the total sugar content in the bio-oil to as high as 20.6 g/100 g biomass. Stage fraction 1 (heavy fraction) of bio-oil obtained from oxidative condition contained up to 67 % of hydrolysable sugar and it was less acidic compared to standard pyrolysis.