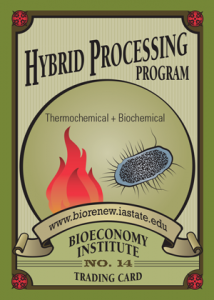 Iowa State University has established a laboratory in the Biorenewables Laboratory (BRL) Building dedicated to hybrid thermochemical/biological processing of biomass. Faculty and students from the departments of Food Science and Nutrition, Chemical and Biological Engineering, Civil, Construction, and Environmental Engineering, and Mechanical Engineering are collaborating in this interdisciplinary program to convert cellulosic biomass into fuels and chemicals using a combination of thermochemical and biological processes.

The overall goal of this program is to address the demand for production of fuels and commodity chemicals from biomass in a manner that is economically competitive with petroleum-based processes. Traditional biomass processing through biochemical pathway is limited by the high cost of the enzymes that are used to break lignocelluloses down into fermentable sugars. In our process, we use a thermochemical approach (pyrolysis), instead of a biochemical approach (enzymes), to release fermentable substrates, such as syngas, sugars, and acetic acid, from biomass. These fermentable substrates can then be utilized by microbial biocatalysts to produce biorenewable fuels and chemicals.

Gasification of carbonaceous feedstocks produces carbon monoxide- and hydrogen rich syngas that can be fermented to various products including carboxylic acids, alcohols, and esters.  The syngas fermentation facility includes onsite sample analysis capabilities and can be used to investigate potential syngas consuming microorganisms.

Due to the low solubility of CO and H2, syngas fermentation is limited by the slow transfer of CO and H2 from the gaseous phase to the liquid phase for microbial utilization.  Hollow fiber membrane biofilm reactors (HFM-BR) and monolithic biofilm reactors (MBR) have special features that lead to increased mass transfer efficiency.  Current efforts are focusing on enhancing mass transfer of syngas fermentation through developing these two types of biofilm-based reactors.

In HFM-BR, syngas is directly diffused through the inner walls of microporous hydrophobic membrane with a large surface area. The membrane also serves as a support for growth of microorganisms attached on the outer wall of the membranes.  Therefore, the microorganisms can consistently access the diffused syngas and the medium nutrients.

In MBR, mass transfer is achieved inside narrow channels of the monolithic packing materials, in which a biofilm is formed one the inner wall, the syngas follows a Taylor flow pattern, and a thin liquid film exists between the elongated gas bubbles and the biofilm.  As the bubble flows through the channel, the liquid film become thinner, it is therefore easier for the gas to diffuse through the reduced liquid boundary layer to the biofilm.  By this unique feature, the mass transfer efficiency of the syngas can be enhanced.

This research is currently funded by the Iowa Energy Center and Iowa State Bailey Foundation. 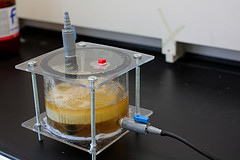 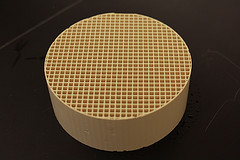 The liquid product produced from biomass fast pyrolysis, also known as bio-oil, is rich in sugars and carbohydrates that are attractive substrates for the production of biorenewable fuels and chemicals by microbial biocatalysts (Jarboe et al, 2011). Our program has developed a bio-oil collection method that concentrates these substrates (See Iowa State University News release).

Light fraction from the bio-oil recovery systems is an aqueous solution that contains about 10-15 wt% of acetic acid, making it an attractive source of carbon and energy for fermentation.

Existing ethanol-producing biocatalysts have been engineered for the use of bio-oil-associated sugars in a method that can be extrapolated to other biocatalysts. For example, ethanologenic E. coli KO11 was engineered for levoglucosan utilization by recombinant expression of levoglucosan kinase from Lipomyces starkeyi (Layton et al, 2011).

Oleaginous microbes such as algae and yeast have been tested to utilize the acetic acid -rich fractions to produce lipids. For example, Chlamydomonas reinhardtii, an algae strain can grow both heterotrophically and phototrophically was tested for culture with bio-oil for lipid production.

This research is currently funded by the NSF Energy for Sustainability program and Iowa State Bailey Foundation. 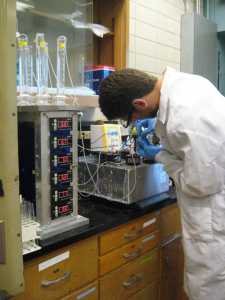 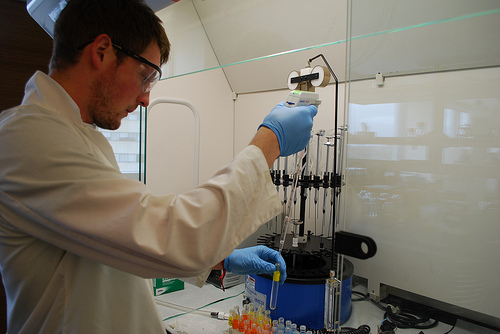 Biochemical characterization of bacterial biocatalysts when exposed to inhibitory compounds, with the goal of making the biocatalysts more robust.

So, K. and Brown, R.C., “Economic analysis of selected lignocellulose-to-ethanol conversion technologies,” Proceedings of the Conference on Biotechnology for Fuels and Chemicals, Gatlinburg, TN, May 4-7, 1998.